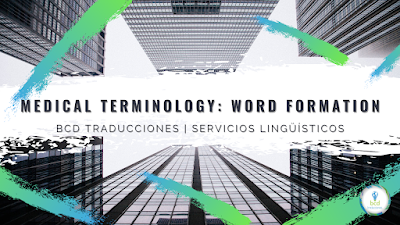 In general, we already understand a number of medical words. Either by choice, or by way of some TV show (early Grey’s Anatomy’s seasons, anyone?), most of us have picked up a few words here and there. However, today we will focus on how these words are formed. We know that words are commonly made up of prefixes, roots, and suffixes, so, a good approach to understanding medical language is to break them down and study their components.

Now, consider the suffix “-ectomy;” we can form the well-known terms “appendectomy,” “hysterectomy,” and “mastectomy” (the surgical removal of the appendix, uterus, and breasts, respectively). There are also lesser-known words that are formed with this suffix, such as “prostatectomy,” “myomectomy,” and “gastrectomy” (the removal of the prostate, uterine myomas or fibroids, and all or part of the stomach, respectively).

Many will find the suffix “-itis" remarkably familiar. Those who have children might know that a common ear infection is also known as “otitis” (the root “ot” meaning ear). A sore throat is also known as “pharyngitis” (an inflammation of the pharynx), which could also mean that the tonsils are swollen (“tonsillitis”).

The suffix “-plasty” is part of one of the most famous cosmetic procedures and reconstructive surgeries in history: the “rhinoplasty” (commonly known as a nose job). Another term that refers to a common procedure is “angioplasty,” which means the surgical widening of an obstructed blood vessel. A “myoplasty” is a surgery to repair damaged muscle. A lesser-known term is “otoplasty,” a procedure to change the shape of a person’s ear.

Now that the foundation is set, it is time to go even further. Take the word “cardiomyopathy;” made up of two roots (“cardio” and “myo”) and the suffix “-pathy,” so we can assume that the term refers to disease that affects the heart muscle. Now, take the word “polyarthritis;” we have the prefix “poly-” (meaning many), the root “arthr” (meaning joint) and the suffix “-itis.” We can think of the inflammation of various joints. In both cases, we would be correct.

However, to every rule there are exceptions, and medical terminology is not exempted. Taking what we learned before, we could assume that the word “osteopathy” means bone disease. We would be wrong. In general, the term “osteopathy” refers to a branch of the medical profession, while bone disease may be referred to as “osteopathology.” Similarly, a “cardiectomy” is not a surgery to remove the heart, but the cardia (a portion of the stomach).

The foregoing is but a brief introduction to the fascinating field of medical terminology. For now, we can only scratch the surface, nevertheless, I hope that this serves as inspiration for you to explore even further.